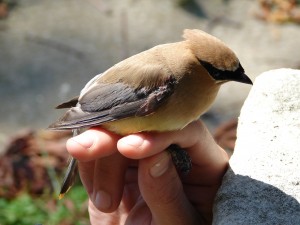 There is a long history of birding and bird monitoring at rare that began in 1971 with observations on bird activity along the Grand and Speed Rivers. Since this time, recreational birding, environmental assessments, biological studies, breeding bird surveys, nest monitoring and bird banding have allowed us to assemble a comprehensive list of 238 bird species that have been observed on the property.

The diversity of habitats at rare, its location at the confluence of the Speed and Grand Rivers and the availability of local keen volunteers means that rare is perfect site for gathering data on bird migration and breeding. The following is a list of bird monitoring initiatives that are currently taking place at rare:

The banding began in 2002 south and east of the buildings at Springbank Farm along Blair Road. However when licensed bander Dallas Johnston moved out of the area in 2004, there was no one to take his place. Thankfully, rare was lucky to have bird bander Kevin Grundy come on board in 2008. Kevin restarted the banding program on two test weekends in spring in the vicinity of the Resource House and Slit Barn. In fall, 2008, the banding program was expanded to 12 weeks between Mid-August and early November to monitor fall migration. Another site was also added up at Springbank Farm. Kevin and his dedicated volunteer crew operated between 5 and 7 nets on most weekends during the banding season. Their efforts led to the banding of 1,034 individual birds and over 63 species during 2008. Bird banding has continued annually including an expansion of the spring bird-banding season. In 2015, banding occurred throughout the summer. During bird banding, up to seven trails and monitoring routes on and adjacent to the rare property are monitored for birds between approximately 7 a.m. and 9 a.m. to determine what species may be present.

The Grand River is a known overwintering site for bald eagles. Annual monitoring of the winter populations of eagles began in 2000 along the Grand River between Glen Morris and Kitchener. This area was expanded to Paris and Brantford in 2006 and was carried out by dedicated groups of volunteers coordinated by Bill and Heather Wilson. Formal monitoring ended in 2011, however sightings are still reported by visitors and residents.  Bald eagles use rare as nocturnal roost sites, for hunting and resting perches and for hunting and feeding. They usually arrive in the area around mid- to late-November and depart between mid-March and early April. In addition to winter residents, migrants have been seen in spring and fall, and since 2010 at least one pair have attempted nesting and year-round sightings are not uncommon.

Between 2001 and 2003, Bill Wilson conducted a four-season inventory of bird species composition using 36 point counts and several line transects within rare’s forests, riparian zones, agricultural fields, and hedgerows. Searches for nests was also undertaken during the breeding season. This monitoring protocol was repeated by Andy Steinburg between 2007 and 2009, focusing on rare’s forests.

Observations from conservation birding (or ‘citizen science’ birding) on rare property have been recorded since 1971 particularly along Grand and Speed River shorelines, river flats and forested cliff areas. Members of Waterloo Region Nature (formerly Kitchener-Waterloo Field Naturalists) bird seasonally on the property (members including Jerry Guenther, Ruth Kroft, Bill and Heather Wilson) while Bill Wilson undertook weekly monitoring between 1994 and 2002.  A seasonal checklist was prepared for bird identification within a three-kilometre radius of the confluence of the Grand and Speed Rivers.

The lands and water courses of rare also lie within Square 17NJ50 of the Ontario Breeding Bird Atlas. The bird populations on the property will be inventoried in preparation for each new edition of the atlas. This square was surveyed by Paul Eagles for the first atlas and revisited by Jerry Guenther, Bill Wilson and Ruth Kroft for the Second Edition. Data for this square can be accessed via http://www.birdsontario.org/atlas/datasummaries.jsp?lang=en.

The Ontario Ministry of Natural Resources also conducts a one-day winter waterfowl count along the Grand River between Conestoga and Paris. This one-day count, includes three monitoring stations along reaches of the Grand River through rare. Of note, 60% of the waterfowl observed on this count is found within reaches which run through rare.

Birders, both novice and experienced, and naturalists are invited to birdwatch and undertake bird studies along the trails of rare . Bill Wilson has maintained seasonal bird records within a 3-km radius about the Confluence of the Grand and Speed Rivers since 1971 – particularly along the Grand and Speed River shorelines, river flats and forested areas. Much of this landscape and riverscape is situated not only in rare but also within Environmentally Sensitive Policy Areas (ESPAs) #36 and #38 of the Regional Municipality of Waterloo and Provincially Significant Wetlands (PSW), Barrie’s Lake-Bauman Creek Wetland Complex. These existing Policy Areas and Significant Wetlands provided the incentive to document bird species, including breeding birds – both resident and summer visitors; migrants on stopover; and winter visitors. Between 1994 and 2002, Wilson undertook weekly monitoring of these ESPAs and PSW adjacent to and within portions of rare. In 1995, a seasonal checklist was prepared, Birds about the Confluence of the Grand and Speed Rivers, Cambridge, ON; the list is updated periodically. Since the late 1990s, several local birders have also contributed to this list including members of Waterloo Region Nature (formerly Kitchener-Waterloo Field Naturalists) and friends and long-time volunteers of rare. Today, significant portions of the landscape within the 3-km radius of the Confluence are recognized as the Blair-Bechtel-Cruickston Environmentally Sensitive Landscape (ESL2) within the Regional Municipality of Waterloo.

There is an extensive baseline of information on bird species diversity and abundance for rare. This information could easily complement bird research in the numerous habitat types at rare. There are also numerous education opportunities for both the general public and students including guided walks and workshops that focus on migration, wintering waterfowl, overwintering Bald Eagle and resident owls. The bird banding operation that was restarted in 2008 also provides an opportunity for the general public to see birds up close and to observe bird monitoring firsthand.

Couturier, Andrew, 1999. Conservation Priorities for the Birds of Southern Ontario.

Wilson, William G., June 2009. Birds about the Confluence of the Grand and Speed Rivers, Cambridge, Ontario.