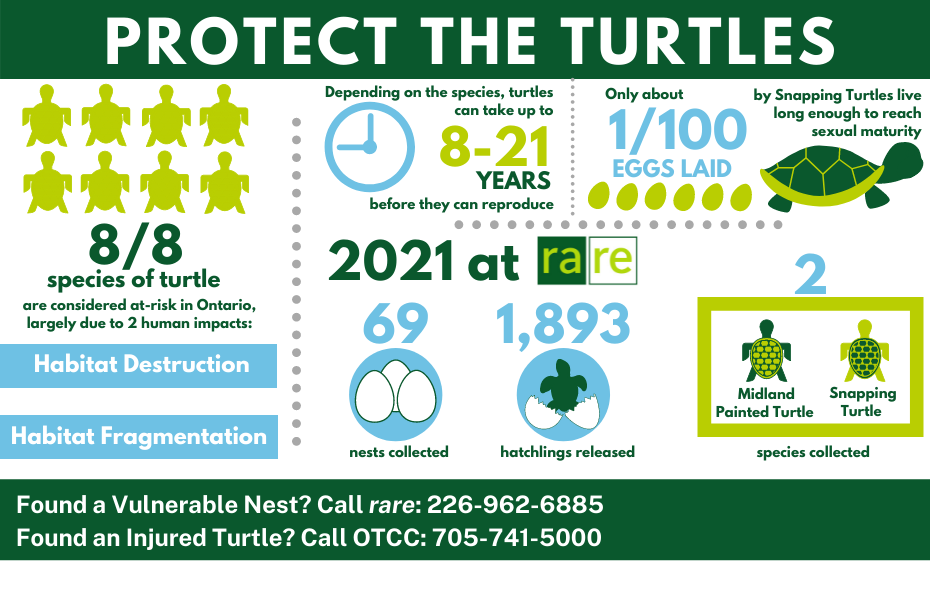 The rare Turtle Project was launched in 2017 to help mitigate human impacts on turtle populations in Waterloo Region and Wellington County.

Turtles require a long, warm season to successfully reproduce. Southwestern Ontario in particular has the largest diversity and highest concentrations of reptiles and amphibians in all of Canada — but also contains the highest concentration of people, largest network of roads and most extensive land manipulation. Habitat fragmentation and road mortality take a large toll on the adult population, resulting in significant declines to species since turtles are long-lived animals with low recruitment rates.

It can take decades for a turtle to replace itself in the wild. To help offset the losses, we are collecting nests from unsuitable locations that are appealing to turtles due to the substrate but put the nests and hatchlings at risk such as construction sites, roadsides, soccer fields, parking lots and volleyball courts.

The eggs are taken to rare, where they are artificially incubated until they hatch. Hatchlings are then returned to a safe area close to the collection site — often within 100 metres. Incubation at rare protects the nest from issues such as compaction and helps improve the success rate of the nest once the hatchlings are returned.

What you can do:

If you have questions about turtles or what to do if you find a turtle nesting or crossing the road, visit the Ontario Turtle Conservation Centre website: https://ontarioturtle.ca/.

If you find a nest that is at risk from human impacts — mark next to the site with a flag or other marker and report the nest to rare’s turtle hotline at 226-962-6885.

If you find an injured turtle, call the Ontario Turtle Conservation Centre Hotline immediately at 705-741-5000. Click here to visit their website for more information on handling an injured turtle.

Nest protectors are needed this 2022 season!

With the effects and restrictions of Covid-19 last season, the rare Turtle Team opened a request for turtle protectors. Due to their success in helping more turtle nests, we are requesting turtle protectors again this summer.

We’re looking for handy helpers who can build nest protectors to help save nests from being crushed or predated. If you are interested in helping to protect turtles, please email Catherine Becsky, rare Administration Assistant, to discuss where you can drop your nest protectors off.

Please refer to the following resources when constructing nest protectors:

The Canadian Wildlife Foundation’s PDF instructions: How to Build a Turtle Protector During Nesting Season

This project was made possible by the Cambridge & North Dumfries Community Foundation — Community Foundation Grant, and donations from individuals. Thanks to a donation from the Ontario Eastern Bluebird Society and a grant from the Helen McCrea Peacock Foundation, rare was able to purchase the supplies needed to double the project capacity in 2018.