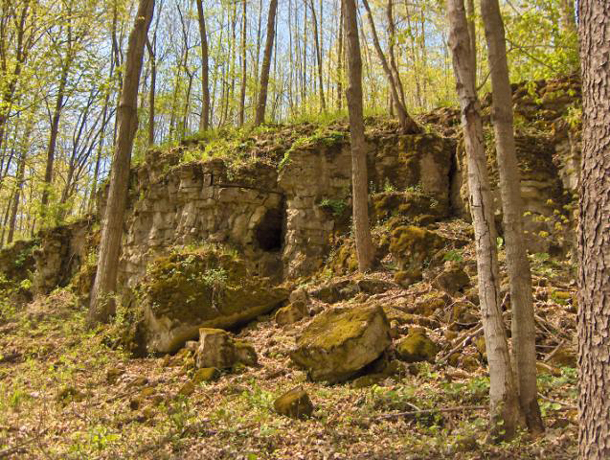 The rare reserve is situated just west of Cambridge and almost exactly at the centre of the Grand River Basin. Although most of the reserve is mantled with deposits from the last “ice age” it is one of the few areas in the Basin where bedrock is exposed at the surface.  Outcrops of upper Middle Silurian Guelph Formation dolostone (a magnesium-rich limestone) can be seen on the south bank of the Grand River where they form small surficial alvars and in the bluffs in the northeastern part of rare. These ~420 million year-old rocks  (part of the sequence that forms the upper part of the Niagara Escarpment farther east) dip gently to the west into the Michigan Basin. They consist of light grey to buff coloured medium-grained crystalline dolostone, that, when broken, has a petroliferous odour.

The early settlers used the thicker units seen in a quarry just to the east of the rare reserve, for building stone, and these were used in the walls of slit barn. Careful examination of these walls show characteristic heart-shaped casts of the large Silurian clam, Megalomus canadensis.  Other fossils can be seen, but the process of dolomitisation has destroyed all but the most robust forms.

Visitors walking through the rare reserve can see outcrops of this tropically deposited dolostone in several areas, notably along the river flats northeast of the slit barn where they form small cliff faces in the riverbank and in the woodland area. Higher outcrops form bluffs at the eastern edge of the rare reserve. In these exposures the well-bedded and jointed nature of the rocks can be seen as well as small solution holes (caves) caused by subsurface drainage and dissolution of the dolostone. The porous nature of the bedrock accounts for subsurface drainage that takes place close to the river.

Overlying the bedrock geology are sediments that were deposited during the Quaternary Period. The time break between the Quaternary and the Silurian periods is about 416 to 418 million years.

During the Quaternary the region was over-run by ice on numerous occasions, but each succeeding glaciation removed, covered or modified the older events. For this reason most of rare is covered by the youngest deposits of the last (Pleistocene) ice advance and materials that have been subsequently moved during the last 13,000 years.

As the ice advanced across the region it laid down deposits of glacial till (ground-up bedrock), principally the Port Stanley Till (~14,800 years ago) and the Wentworth Till – the youngest – (~13,500 years ago).  About 13,000 years ago ice had virtually vanished from the region. The landscape would have looked like the modern northern tundra.

The Grand River was much wider and deeper, enlarged by floodwater from the ice melting farther north in the basin. The glacial Grand carried large quantities of sand and gravel that were deposited to form the higher areas of rare south of the Blair – Cambridge Road. Where the more porous sand and gravel sequences overlie the impervious till, seepage lines occur, such as that at Springbank Farm. Farm Ice floes in the glacial river often had far-travelled blocks of rock from the Canadian Shield north of Lake Huron embedded in them and, upon melting, allowed the erratics to settle; joining others that had been left behind following ice retreat. These still litter the landscape, often piled at field boundaries, or utilized in the foundations and walls of older buildings. Several can be seen near the slit barn.